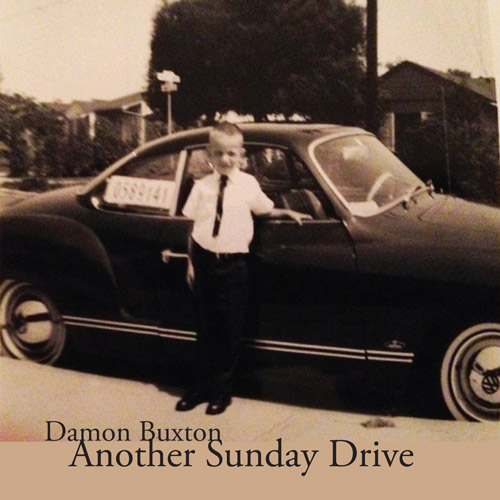 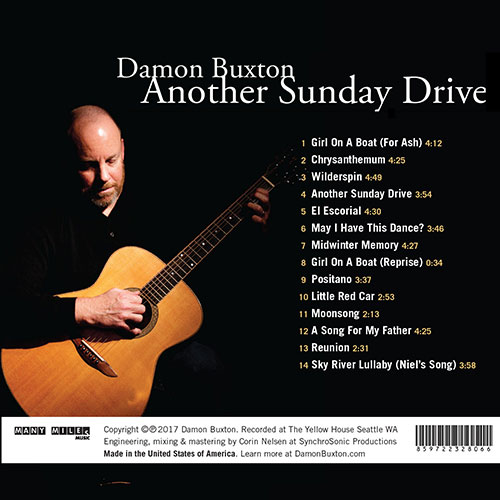 In memory of Willard Charles and Ruth Ella Buxton

This music was inspired by a car that’s been in my family for 54 years, a Volkswagen Karmann Ghia. My father bought it brand new in 1963, when I was 5 years old, and it’s always been a family member. It took us on many trips, and eventually I learned to drive in it.

In 1991 my mother died and, unable to drive it or sell it because it reminded him of her, my father put the car in storage for the next 24 years. Over the last two years, as I’ve been writing music for this new album, my father passed away and left the car to me.

I had it restored in my parents’ memory - a touchstone that connects us through time.

Girl On A Boat (For Ash)

I wrote this piece for Ash, my longtime friend and muse, about a week after she moved to Alaska traveling by ship. The verses and chorus came right away. The bridge came later, during a visit with her, while Lily and Ash talked late into the night.

For Lily. Along with the first song it is the centerpiece and beginnning of this record.

I’d love to say this was a clever name I invented but it was written on a headstone in a graveyard in Pennsylvania. A happy traveling tune.

When we restored the car we discovered the radio no longer worked. The shop asked if I’d like to replace it and I replied that my wife and I have the kind of relationship where we can spend the whole day in the car together and never turn on the radio. My parents started the driving tradition after church and dinner with my grandparents. After I was too old to ride in the back they drove on their own. It is strange and wonderful that Lily and I continue the drive in the same car they enjoyed.

A flamenco exploration and homage to Paco de Lucia. The Escorial is a monastery in Spain, and plays a cameo role in the old motorcycle movie “On Any Sunday” for which I’ve long held an appreciation.

May I Have This Dance?

Like a gentleman twirling a lady in a flowing dress around a polished dance floor. Well dressed and exceptionally polite.

Looking out a window on a rainy February day to remember floating in an inner tube on the river on a hot summer day holding hands with someone you love.

Girl On A Boat (Reprise)

There’s a little town on the Amalfi coast in Italy, in the Campagne region on the west side, where tiny boats float up onto the beach and girls in sundresses and boys in suits and dark sunglasses talk and laugh and dream. Lunch is seafood and pasta in red sauce with San Pelligrino and wine and bread made by hand that morning. It was my father’s most favorite place in all the world. He took me there when I was eleven, with my mother and sister. Let’s meet at the Buca di Bacco.

This song has been wandering around in my brain for years, in need of a title and some polish. Another happy driving song.

I composed this in my head on an airplane over water late at night, watching the moon and stars float over the clouds. I somehow managed to remember it when I got home and it sounded best on ukulele.

A Song For My Father

A simple song to remember the good, the bad, the happy and sad, the gifts we shared and lost and will long remember. I love you, Dad.

I flew to San Diego on my birthday in March 2016 to play music at my father’s funeral. Waking up at the hotel the next morning I realized I was going to be standing on my mother’s grave, over her bones, as I faced the gathering of friends to play “Book of Ruth,” a song I wrote for her after she passed 25 years before. And what went through my mind was “Reunion.” That wherever we go after this life my parents were together again. I picked up the guitar to rehearse a little and this song came through.

I had this record done at thirteen songs and then a friend died, much too young, and in a terrible way. And this little town on the river with a train and a highway and a bookstore and a bar spilled its heart wide open and grieved.

All of you for listening. Ruth and Will Buxton for our legacy of love. Ash for being family and for our long conversation of so many nights and years. Cassie Kaminski for the gentle voice and strong hands that make it all new again, week after week, time after time. Corin Nelsen for being my musical compass and guide, six times now, for over ten years. Mike and Alex Gregory at House of Ghia for bringing my parents’ memory back to life. Charles Anthony for listening, for helping me learn, for being. Courtney Jemmett and Katherine Paz for giving us warm and loving places to be. Adam Werner for going the Many Miles. And finally, to my sweet Lily, the author and artist L.A. Smith-Buxton, for loving me, being my love, and giving wings to my dreams.

All songs written, arranged, and performed by Damon Buxton
All songs ©(p) 2017 Damon Buxton and published by Many Miles Music (BMI)